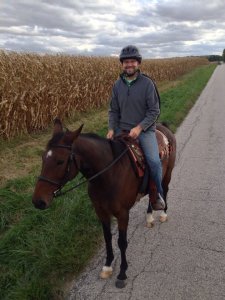 Chris Stevenson spent his childhood in a small town in rural Indiana. Throughout high school, college, and then law school, he thought history was boring, nothing but a bunch of dates to memorize in order to pass a test. When his work as an attorney in Indianapolis demanded a lengthy commute, Stevenson began listening to books on the drive. It wasn’t long before he found that history wasn’t what he thought it was. There were real people and real stories behind the mundane dates, and no story was more fascinating than the American Revolution. He then began reading or listening to almost every non-fiction book he could find on the Revolution. Characters, such as Washington, Knox, Greene, Lee, Arnold, and many more came to life. Stevenson learned why Washington crossed the Delaware, instead of just when he crossed. With five boys at home, likely doomed to repeat their father’s same disdain for memorizing historical dates, Stevenson set out to convey these amazing Revolutionary characters, and their ability to take on the world’s most powerful empire, in the form of middle-grade historical fiction books. Armed with his knowledge of the period and the writing skills acquired from his legal profession, Stevenson wrote THE DRUM OF DESTINY and CANNON OF COURAGE

Stevenson’s own destiny has taken him all over the map, literally. After graduating from Purdue University’s flight program, Chris went to work for a cargo company flying Boeing 727’s all over North America. After flying a few years, it was off to law school at Indiana University, where writing became central to Stevenson’s life.  So much so, that he was honored with a position on the Indiana Law Review, served as an editor, and then had his student note published. Chris went to work with a litigation law firm and has wrestled with issues ranging from aviation to appellate briefs for the past fifteen years. As fulfilling as work may be, there’s nothing quite like writing books to get kids (and adults) interested in history!

One thought on “About Chris”