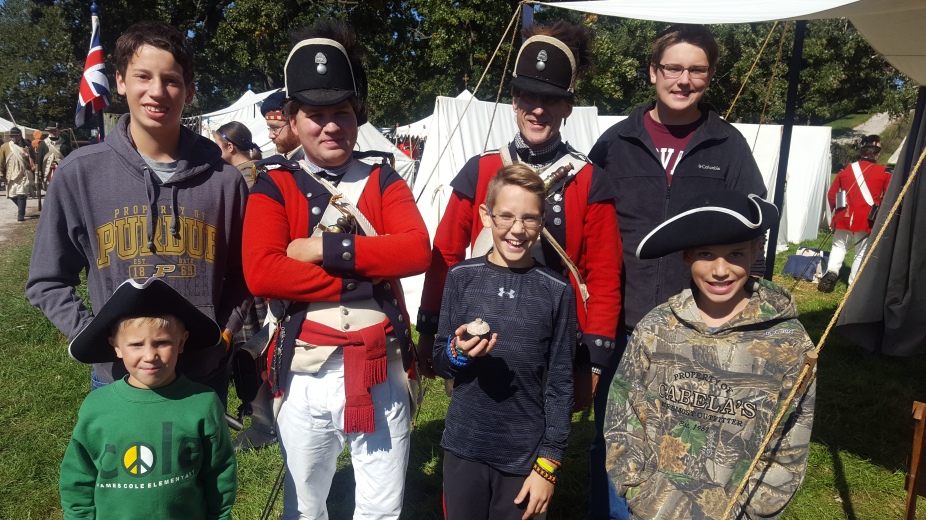 The British Grenadiers were an elite 18th century fighting force. These soldiers were called upon to be in the front lines of an attack and would lob primitive grenades onto the enemy before attempting to storm whatever walls and other battlefield obstructions lay in their path. Grenadiers were usually handpicked for their stature and strength and then given tall hats to make them appear even more intimidating to the enemy. The hats had small brims so as not to impede throwing and were often decorated with embroidery or fur.

Grenadier’s carried their grenades in a leather pouch slung over the shoulder, usually on their right side. The grenades were just iron balls filled with gun powder with a fuse on top. The fuse would be lit and then the iron ball would quickly be thrown, or sometimes rolled, into a line of enemy troops. The idea of standing in the line of fire to light a fuse on an iron ball that will explode in your hand if not thrown quickly is, to say the least, a bit terrifying. Thus, Grenadiers were considered some of the bravest hearts in the British army.

Grenadiers needed a way to light their grenades, and butane lighters hadn’t yet been invented. The answer was a piece of slow match, or match cord, that was carried in a match case attached to the breast of the Grenadier’s uniform. Slow match was made by soaking rope in a nitrate solution. Interestingly, and a little gross, the nitrates were often extracted from urine or manure. After soaking, the rope was allowed to dry. Infused with the potassium or sodium nitrate, the rope would burn steady and very slowly, allowing a Grenadier to light the fuse on his grenade in the midst of battle.

While Grenadiers were still considered an elite fighting force at the time of the American Revolution, their use of grenades had dwindled somewhat. Military tactics had changed and the wilderness of the American Colonies did not lend itself to grenade use. Nevertheless, British Grenadiers were feared by American soldiers. Their tenacity and bravery were known to send untrained American soldiers running. At the Battle of Brandywine on September 11, 1777, British Grenadiers broke the American line of battle and chased the American soldiers for nearly two miles, all in the face of heavy cannon fire. Known for their many acts of bravery on the battlefield over the course of British military history, the Grenadiers have been given their own battle march. Here’s a few lines from the song and a link to the familiar tune.

When e’er we are commanded to storm the palisades, Our leaders march with fuses, and we with hand grenades; We throw them from the glacis about the enemies’ ears, Sing tow, row row row , row row row, For the British Grenadiers.

And when the siege is over, we to the town repair. The townsmen cry ‘Hurrah, boys, here comes a Grenadier’. Here come the Grenadiers, my boys, who know no doubts or fears. Sing tow, row row row , row row row, For the British Grenadiers.

The fighting prowess of these Grenadiers, professionally trained warriors, makes me marvel all the more at how we won the war for independence. It’s truly a testament to the resiliency of the American Colonists who were able face this formidable enemy. Huzzah!