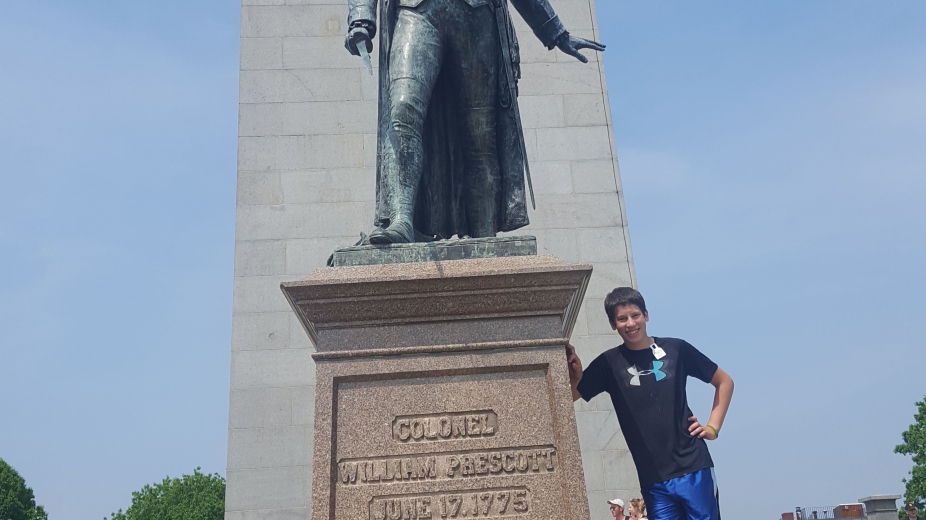 On this day June 17, 1775, the patriot militia battled the British atop Breed’s Hill and Bunker Hill. These two hills are part of the Charlestown Peninsula just to the north of Boston. While the militia eventually lost the ground, retreating to Cambridge, they inflicted heavy casualties on the British Regulars. The British killed and wounded totaled just over 1,000, while the Patriot’s lost only 400 men to death or wounds.

In the weeks leading up to the battle, the patriot militia surrounding Boston feared that the Regulars would mount another march out of the city just as they had done at Lexington and Concord. To keep the British from leaving the city by the narrow stretch of water to the north of Boston, the militia decided to secretly move part of their army to the hills on the Charlestown Peninsula. On the night of June 16th, the patriot army began their secret maneuver. William Prescott led the men along with Israel Putnam. The original plan had been to set up a small fort atop Bunker Hill. However, in the dark night Prescott led his men further out onto the peninsula and mistook Breed’s Hill for Bunker Hill. He didn’t realize his mistake until light began to dawn. By then it was too late as the men had already thrown up earthen walls and redoubts atop Breeds Hill. As the morning dawned, Prescott would have looked out and realized that his decision to fortify Breed’s Hill would be sure to draw the British out of Boston. Since the patriot’s cannon, few as they were, could now hurl balls down on Boston from Breed’s Hill, the British had to remove the militia from the hill.

Joshua stands beside Prescott’s statue at the Bunker Hill Memorial

Prescott’s view of Boston to the south of Breed’s Hill has changed a little.

Led mainly by General William Howe, the British believed that the patriots would turn and run when faced with the might of the British army. Without a clear leader (George Washington had not yet joined the army at Cambridge), confusion and disorder was a problem as many patriot soldiers had no idea what they were to do. Some stayed on Bunker Hill, while others made their way to Breed’s Hill. While there was no one clear leader, the men were ready to fight. Many were still angered over the loss of loved ones at the Battles of Lexington and Concord. The men’s resolve to fight was strengthened when the British began their assault by setting fire to the village of Charlestown.

The Battle of Bunker Hill, by Howard Pyle 1897

The British army made three assaults on Breed’s Hill. With each assault, Prescott and Putnam instructed their men to not fire “until you see the whites of their eyes.” With muskets only having an effective range of 50 to 100 yards, the militia had to wait for the Regulars to get close before firing. The patriots were deadly marksmen, purposefully picking off British officers and sending devastating musket volleys into the British ranks. At one point in the battle, General Howe, having just led a group of men up the hill, found himself standing nearly alone within yards of the patriot fort. All of the men surrounding him had been cut down by musket fire. Howe miraculously escaped harm as he retreated back down the hill. On the third assault, the patriot’s began to run out of gun powder. The British, with bayonets fixed, stormed over the earthen walls. Patriots were forced to either flee or fight with their bare hands. Many used their musket stocks as clubs attempting to beat away the British. The carnage as the British stormed the walls atop Breed’s Hill is difficult to imagine.

Today, a memorial sits atop Bunker Hill to commemorate the battle. Visitors can climb the 294 steps of the spiral staircase to reach the top of the monument and catch some amazing views. To learn much more about this battle where the fledgling patriot army found the courage to stand up to the might of the British Regulars, check out Bunker Hill: A City, A Siege, A Revolution, by Nathaniel Philbrick.

View of the Bunker Hill Monument from the Charlestown ferry boat.

2 thoughts on “The Battle of Bunker Hill”